Saturday 8th of September, 23:00 PZS 3695 views
Slovenian Janja Garnbret, Lead World Vice-Champion 2018 in Innsbruck, and Kai Harada of Japan stormed to the top of the Bouldering podiums on 14 and 15 September at the 2018 IFSC World Championships, another Slovenian climber Gregor Vezonik won bronze medal.

It's been two years since the last IFSC World Championships Final and it was worth waiting as the best women climbers offered us a breathtaking show tonight in Innsbruck.

It all began with Semi-Finals where 4 athletes reached the Top: Janja Garnbret, Jain Kim, Jessica Pilz and Anak Verhoeven. Young Ashima Shiraishi and Mia Krampl fought there with tremendous energy. Behind her, 4 athletes reached the same hold (44+): Mei Kotake, Akiyo Noguchi, Laura Rogora and Hannah Schubert. This led to an unusual situation where 10 athletes were given access to the Lead Final in Olympia World. 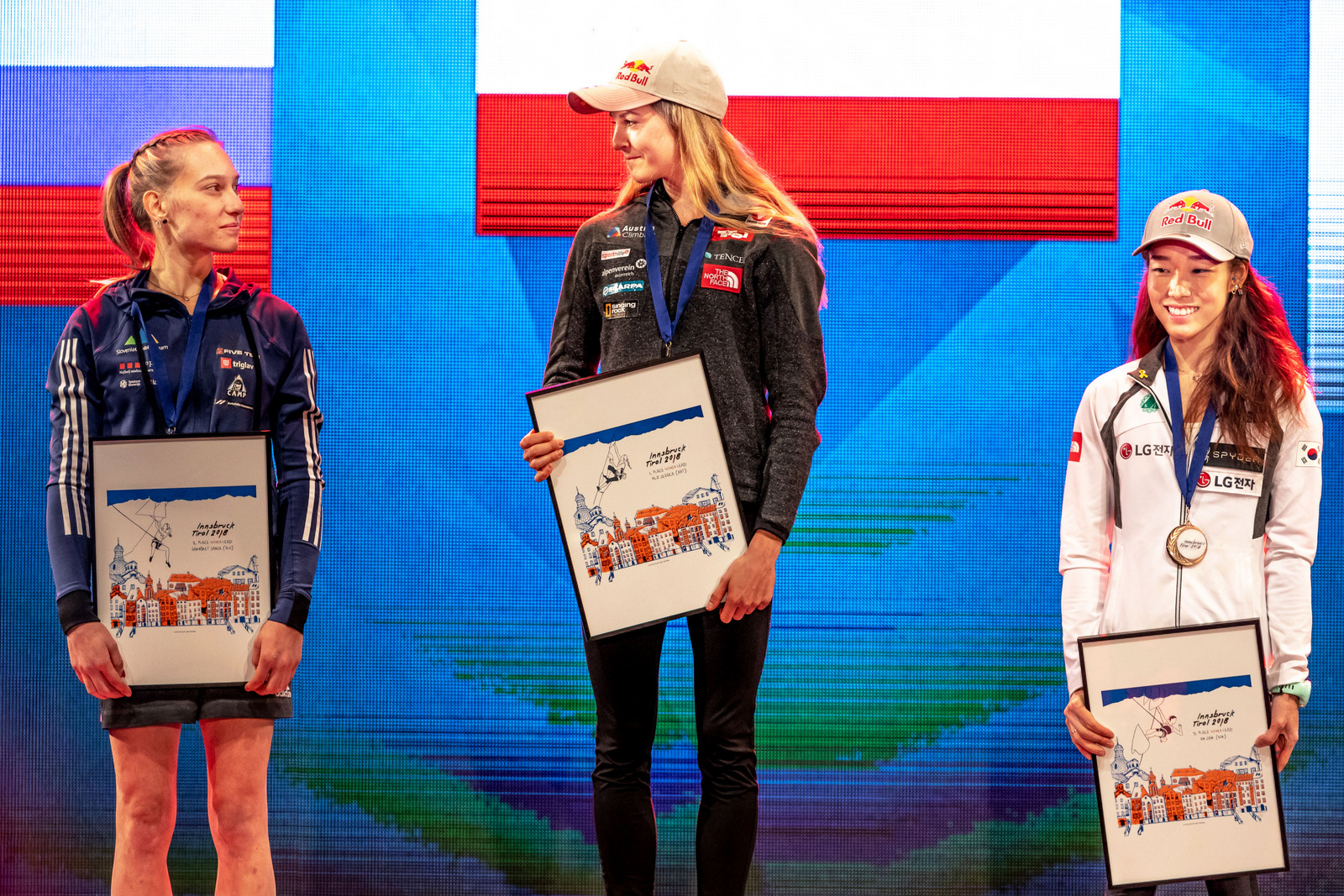 The atmosphere herein was incredible as each of those 10 athletes climbed in front of an expert crowd. And it became obviously even more remarkable when the two locals of the event made their attemps. Hannah Schubert ranked 9th, improving her already promising 19th place in Paris 2016. The now silent Olympia World still resounds with the thunderous applause that pushed Jessica Pilz to the top. When she reached it, only one climber was left: Janja Garnbret. The reigning World Champion cruised to the Top and the time was then the only factor deciding who will be the new one. Being the fastest, Jessica Pilz became the new World Champion. As for the third place, Kim Jain took it, 4 years after her Title in Gijon (Spain).

After topping every route the week prior in Lead but placing 2nd on time in finals, Janja Garnbret left no doubt in Bouldering. She was the only athlete in semi-finals on Thursday morning to flash three problems. Bouldering season champion in the IFSC World Cup series Miho Nonaka (JPN), previous Bouldering world champion Petra Klingler (SUI) and newly crowned Lead world champion Jessica Pilz (AUT) were among the athletes handling the pressure on the last problem to advance. 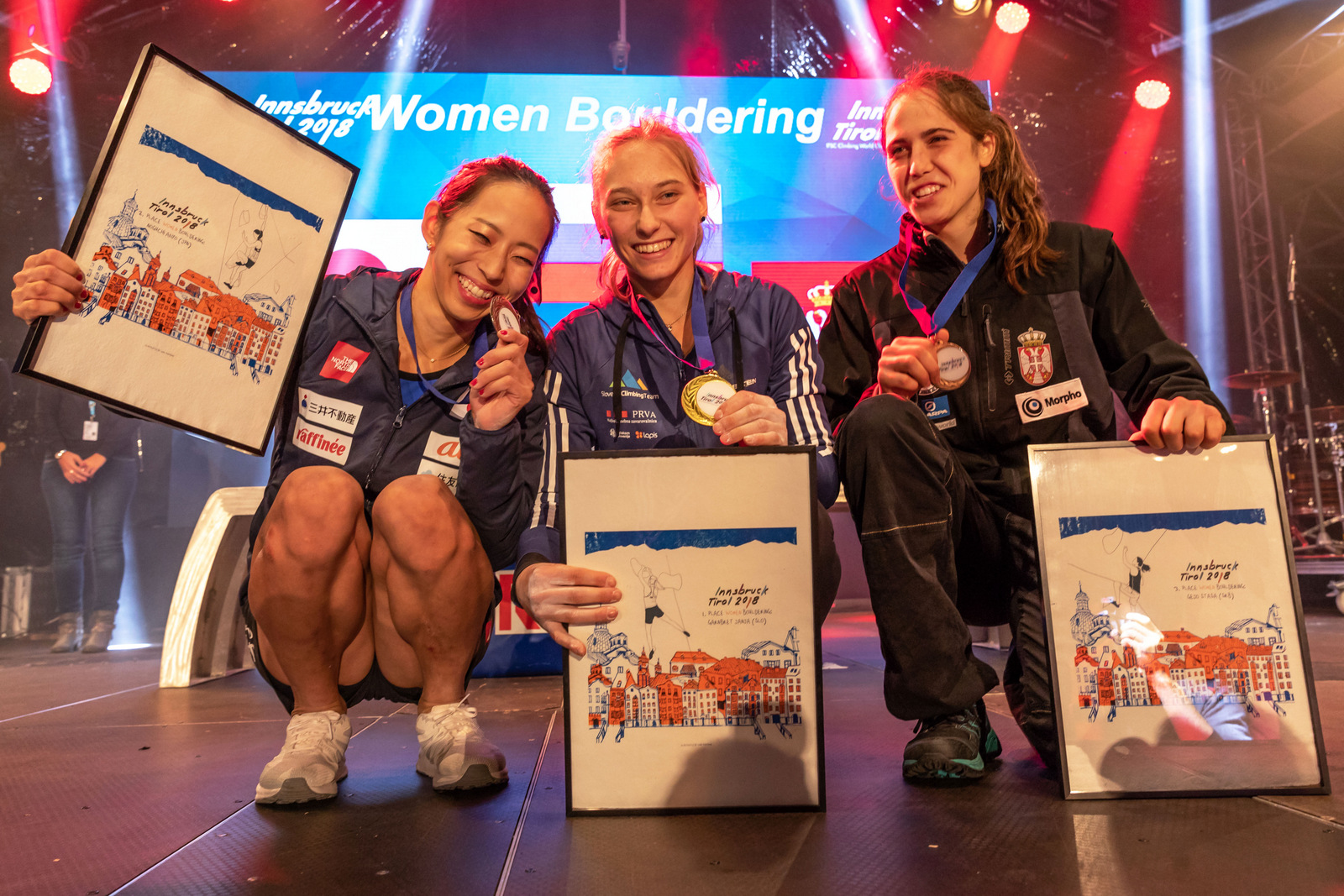 Four more challenging problems awaited the six finalists in the evening, requiring maximum effort to score tops as well as zone points. A zone point is marked on every problem at a difficult to reach hold and breaks ties when the same number of tops are completed (number of attempts to tops and then number of attempts to zone points would break remaining ties). Stasa Gejo (SRB) was first to solve the multi-move jump start to score the zone point on the first problem (W1), but Garnbret took the lead by securing the jump and sticking the dyno to the finishing hold for the top. Technical moves on a steep section of the Bouldering wall forced the finalists into contorted positions on W2, and Garnbret gained another advantage by scoring the zone point. Gejo and Akiyo Noguchi (JPN) topped the W3 slab, but Garnbret sealed the world title in Bouldering and a second medal in Innsbruck with another top and zone point. Akiyo Noguchi kept the body tension on the strength-based final problem to overtake Staša Gejo for 2nd place, and Gejo won the first medal for Serbia at the IFSC World Championships.

Obtaining four tops in the men’s semi-final on Friday was the ticket to advancing to finals. Bouldering season champion Jernej Kruder (SLO) and previous world champion Tomoa Narasaki (JPN), leaders after qualifications, missed one top and did not advance. 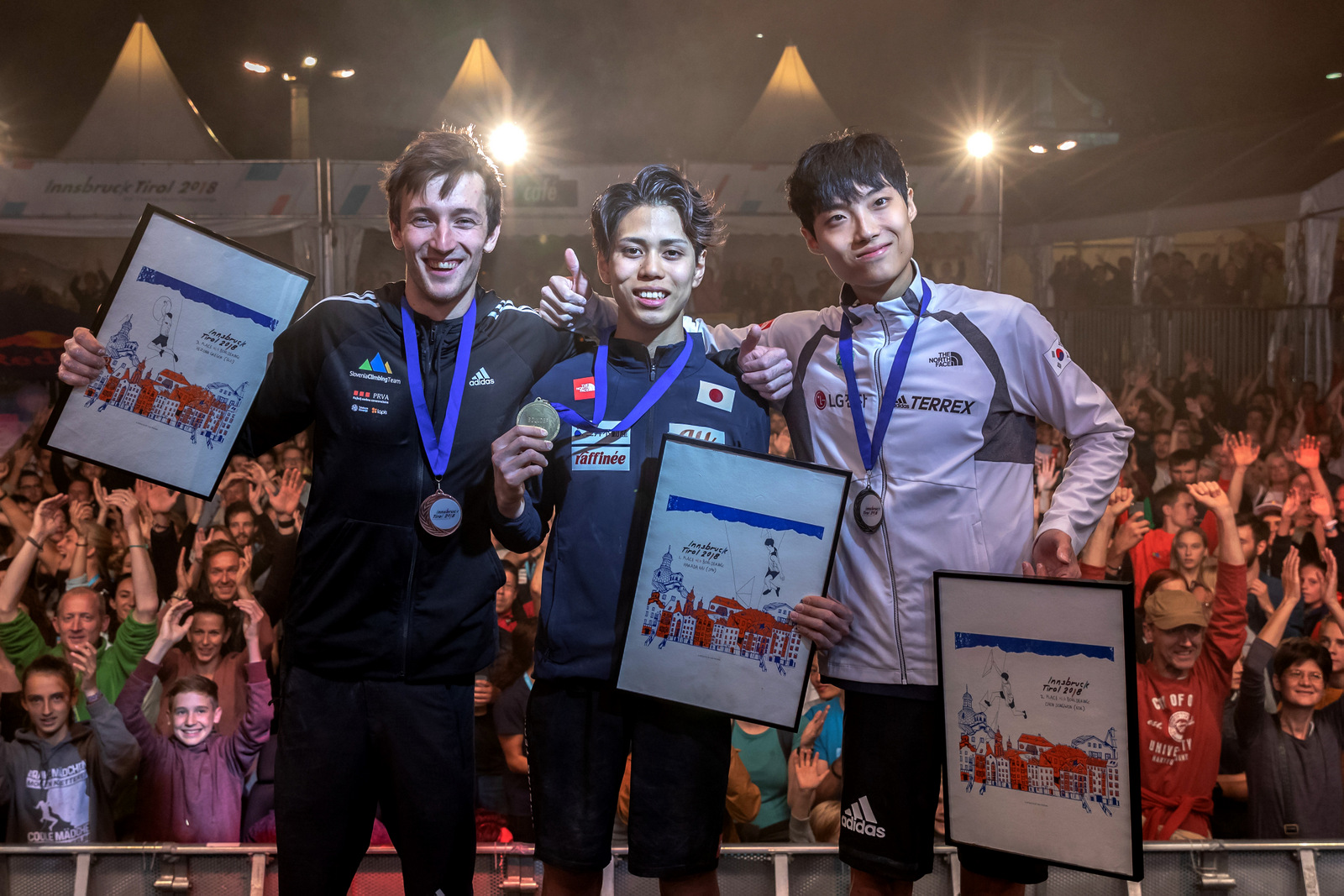 All six finalists topped the first problem of the men’s Bouldering final on Friday evening, but Jongwon Chon (KOR) took an early lead by completing the triple dyno and continuing for the top on his first attempt. On the M2 slab, Harada scored a flash of his own to gain a lead he would never give up. He was the first athlete to connect the technical moves on M3, solving the palm press at the zone point and seamlessly switching into the barn-door swing before topping. Chon and Kokoro Fujii (JPN) also completed the problem, and Gregor Vezonik (SLO) secured the zone point in the final seconds of his turn to stay in the medal hunt. Kai Harada showed precision under pressure on the last problem. He latched the tiny thumb catch at the zone point and kept his composure on the next moves for the flash, securing his first gold medal at a senior IFSC event on the biggest stage. Chon placed 2nd with one less top, and Vezonik placed 3rd behind Chon by zone point attempts after scoring the only other top of M4.